PANDORA - Hope in a Culture of Blame

In the myth of PANDORA, the first woman was named, shamed and blamed for introducing all the evils of the world. Only Hope remained in the jar

‘Pandora’s Box’ is a participatory workshop, a re-telling of the story from Pandora’s perspective -  through original music, dance, storytelling and song.  What will we open up? Join us in this exploration of creativity, hidden feelings, fears and hopes, aimed at and adapted for KS1-3 groups as well as the wider community. 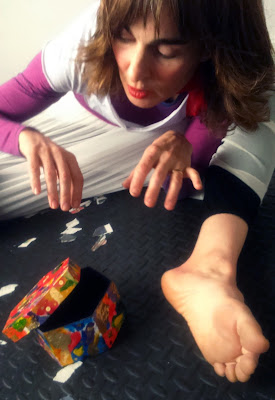 How will we work in general?

Each workshop will be different according to the life experiences and themes. Feelings of uncontrollable curiosity, boredom, fear, anticipation, shame, guilt, finding a scapegoat, the struggle to find meaning and hope. Typically we will present a partial performance and see what it stimulates in the attendees.

Why this piece and what’s the point?

This undertaking of the story of Pandora is fuelled by Judith’s personal experience in becoming a single parent through widowhood: feeling separated, shamed and blamed by prevailing views of the Establishment (eg reliance on Tax Credits). Our experience is that when we enter dark, uncomfortable feelings in creative ways, alongside each other, held by experienced arts practitioners, it can allow illumination of issues, even transformation.


How will we carry out the workshop?

The opening performance lasts 10-15 minutes. All the school children listen and observe - also get actively involved. The story builds suspense as Pandora arrives with a mysterious box, knows not to open it, yet is curious, a curiosity which is overpowering. The story ends as the box is opened and words about bad things come out. Pandora enters a spin of despair and confusion. She is named as the one responsible, she is shamed, she is blamed. We convey this through movement and harmonious and dissonant music.


Later: The artists work with smaller groups.  School children will provide a musical score with school instruments. Pandora (Judith) invites the children to adopt a physical position that relates to Pandora’s shaming. The children choose what feels right and try and connect with the appropriate feelings as they get into position. Then Pandora (Judith) invites the children to rise up, unfurl, stretch, towards a feeling of freedom. The trumpet/shruti box (a sort of drone giver) can also help to accompany this.

RUNNING ORDER (and guide as to how a workshop might unfold):

MANTRA is interspersed with “9th chord”...”but she was curious”, (what was in the box?) “was it something beautiful?”  “was it her heart’s desire?”

“Now she’s WATCHING THE CLOCK”….quarter past, half past, quarter to, one o’clock” (x2) (Children can join in with this)

“And, watching the clock for hours she fell into a sleepless dream” improv with trumpet, piano and Pandora’s hand reaching out to the box, when not playing the piano keys.  The tension builds...

Suddenly - unexpectedly, she opens the box...horrible words (in the form of small fragments of torn up newspaper) fly everywhere.  She looks at the words, moves with the words, tries to piece them together...but it’s overwhelming.  She throws the words high into the air and dances a dance of despair, as the words fall around her.  She realises she must get back to the box, so she reaches for it, grabs it and holds it close.

HOPE is left in the box!  This is our motivation: what do we do with HOPE?

I wrote this as a possible ending...which I think is a happy ending.  But the workshops might pan out differently, so we are available for any ending or outcome! “And gradually the love, kindness and compassion of people woke Pandora from her near death.  And she realised that love casts out all fear, and she believed in herself and trusted that, while some people might still blame her for what she had done, others would love, respect and understand her.”